The Kroc School's Trip to Colombia: A Social Innovation Experience I will Forever Cherish

The Kroc School's Trip to Colombia: A Social Innovation Experience I Will Forever Cherish

The following post was written by Master's in Conflict Management and Resolution student Womaniala Gerald.

Writing your own history may seem difficult, but my experience in Colombia brings me closer to writing mine. Born and raised in Uganda, East Africa, I never dreamt that fate and destiny would take me places. My educational hopes vanished when I became a refugee in North Eastern Kenya after being axed out of my ancestral home due to irresistible and unceasing forces of political persecution.

From the refugee camp to San Diego in late 2007, I did not fathom any possibilities of ever returning to school given the financial hardships that my entire family faced. Miraculously, and with the guidance of the Kroc School's Assistant Director of Student Recruitment and Outreach, Miranda Williamson, I was able to enroll in the Master of Science in Conflict Management and Resolution program, a decision that I will richly cherish till the end of time. 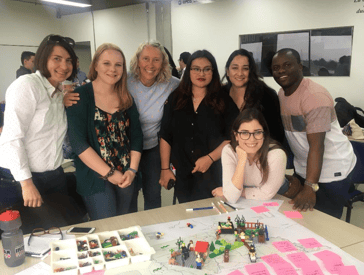 When destiny paved the way for me to participate in a field-based practicum in Colombia, I had to embrace it. In the fall of 2018, I was studying strategies for international conflict prevention and resolution that Colombia featured. I wanted to go to Colombia because it would provide me with a more profound sense of understanding about conflict in that country, as well as the opportunity to interact with the Colombian population and visualize the strides that they have taken in terms of social innovation to boost their economy following many decades of armed conflict.

In March 2019, we finally got to go to Colombia, and each day there offered many lessons. The themes of social innovation I'd studied were present everywhere — they opened my eyes and reminded me of the importance of support systems. Any government that does not have the capacity and resources to meet the growing needs of its entire population will always leave a segment of its people with no viable alternatives but an uphill battle to face in the process of sustaining their needs. The proof is all around — people in Colombia have become more creative and innovative.

In my view, innovation is when someone can exercise their skills in ways that sustain particular needs and work towards self-sufficiency. From one corner of the street to another in Bogotá, Colombians display a business mindset similar to what I have witnessed as a common trend and phenomenon among struggling Ugandans. 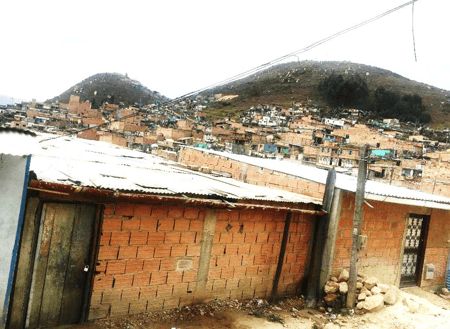 On arrival in Bogotá, I checked into the hotel and opted to spend some time moving around to acquaint myself to the neighborhood. With no Spanish skills at hand, all I needed was a few Colombian pesos and my cell phone to help with translation in case there was a need.

In the early hours of that chilly and gloomy Saturday morning on March 2, 2019, many business vendors equipped with carts full of merchandise moved strategically to bring freshly picked and cheap produce to their highly esteemed customers. I studied each one intently. These men and women on the streets were proud of their business ventures and demonstrated good customer service. Not even the unpredictable Colombian weather would be a hindrance. With their four-wheeled carts suspended on the ground, they made a wide range of food items and drinks to serve people going to work or other unknown assignments.

In pursuit of proving myself to be a supporter and advocate of social innovation, I stepped up and bought a few pancakes (called "arepas") from a man in his mid-thirties, savored each bite, and enjoyed them to the fullest. As I ate, I observed more and more people buying from this particular vendor before strolling on to work. He clearly had a loyal clientele. Next to him was a young and industrious couple with a machine that made lime juice. It was yet another innovation that I did not know existed. The couple had a sack full of limes from which the woman picked continuously, then she fed them into this little machine that kept squeezing the juice out of the limes, and the liquid would then be poured into three different sized cups: small, medium and large — each cup had its price tag. Although it was a simple venture, it was evidence of individuals using what they had to start a business, support the community, improve the economy, and improve their own lives.

This wasn't the only introduction to social innovation I had in Colombia. My understanding of what survival meant post-conflict went to the next level when we took the tour of the Gold Museum in Bogotá, and as I watched even more vendors nearby — clusters of several men and women of various age groups scrambled to reach out to customers, doing their best to convince the visitors to buy their products.

One man in his early forties was selling mangosteen fruits. Through a translator, I learned that this man once owned a well-established restaurant, but he had to abandon it as it was always a target by the FARC rebels. Because he had an entrepreneurial spirit, the man had to relocate to Bogotá and indulge in the buying and selling of fruits to sustain a living. Adjacent this man was a woman with a jovial spirit selling corn. I learned that she buys from the rural corn growing areas, then brings the produce to the city. She has become an icon for selling corn, and it is a delicacy for locals once she seasons it with salt, pepper, and butter. 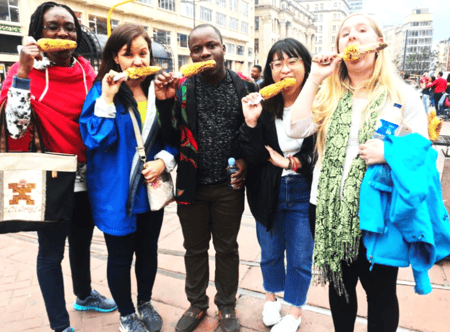 There is nothing precious that I needed from my trip other than being a witness to stories of hope, a new beginning, and conflict transformation by Colombians. The magnitude of the conflict may have left them with permanent marks of suffering that may never heal, but these icons have decided to embrace peace and uphold social innovation for a new face of Colombia.

Ready to start your journey as a social innovator? Learn more about the Kroc School's Master's in Social Innovation program.