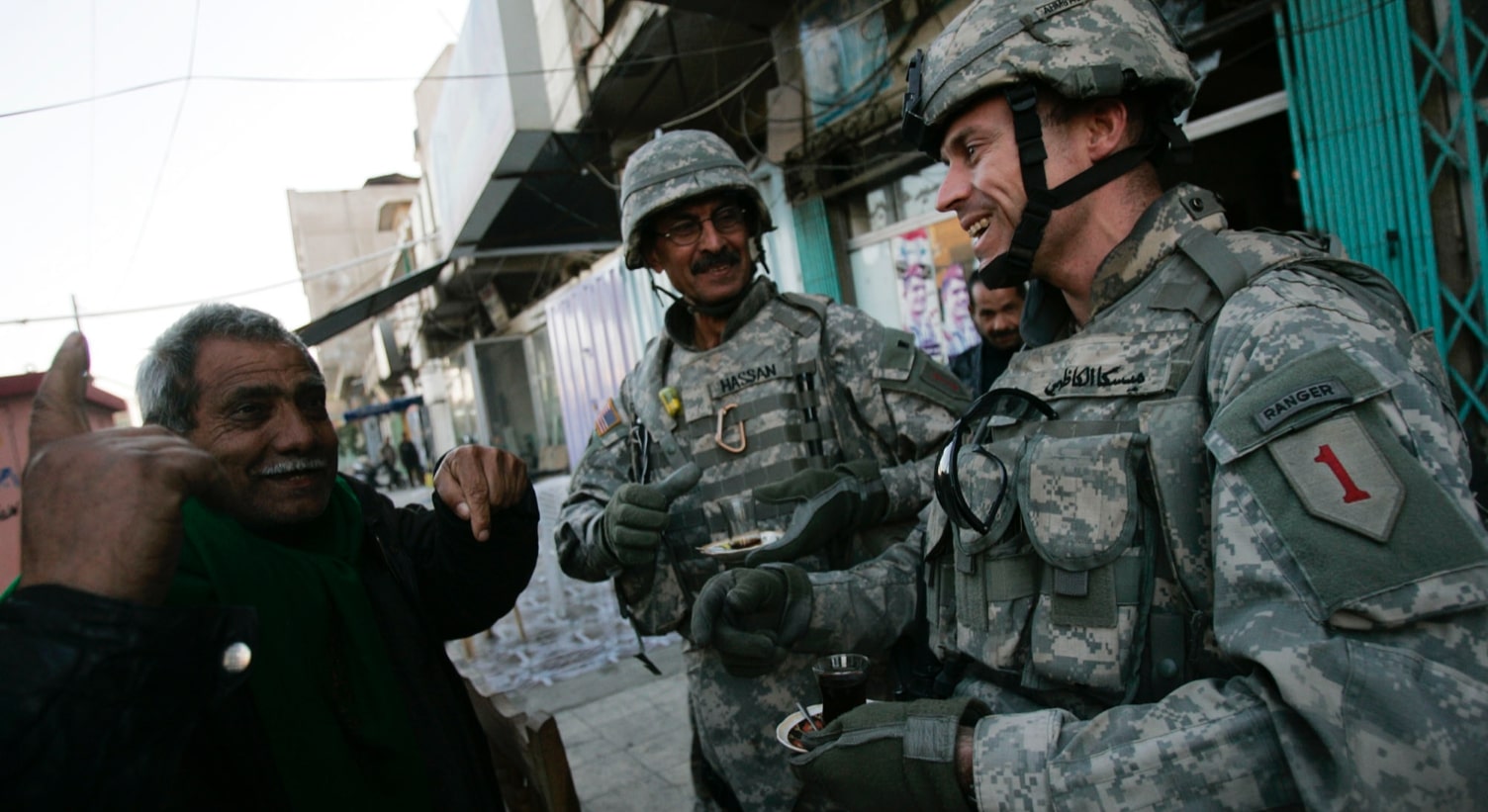 The following post is contributed by Steve Miska, Principal Investigator for Strategically Protecting Soft Networks™ (SPSN), a project supported by the Pacific Council on International Policy in L.A. and numerous other partners to protect vulnerable allies who work with Americans in conflict zones. This summer, Kroc School Master’s in Peace and Justice student Alek Ball interned with SPSN and, upon his return, shared anecdotes of his experience with fellow students, faculty, and staff. Fascinated by what we learned, we contacted Miska for more information about the origins of SPSN and his experience working closely with Ball…

In late 2006 I led a small team in Khadamiyah, a sensitive Shia religious location in Baghdad, Iraq. The height of sectarian cleansing, Shia militia committed atrocities against Sunnis as retribution for al Qaeda attacks on population centers. Given that the conflict qualified as a civil war, even though nobody in the U.S. government would use that term, the people who partnered with our forces took extreme risks. When they started to get killed for working alongside my team, we decided to do something to protect them.

Our only option at the time was a newly authorized Special Immigrant Visa to send interpreters who worked faithfully to the United States. By the time I left Baghdad in late 2007, my team had processed about three dozen interpreters through what we called the Underground Railroad from Baghdad to Amman, Jordan, and on to America. While this situation seemed dire and unique to my experience at the time, I later realized that it was an age-old problem. Vietnam veterans relate similar stories to those shared by Afghan and Iraq war veterans today.

Adversaries of the United States continue to undermine efforts in conflict zones by targeting U.S. soft networks, or local national partners. Military leaders and diplomats have few policy tools at their disposal to insulate those networks, and many times, do not anticipate the attacks until their closest partners quit, flee or are found dead.

Given the likelihood that enemies will continue to pursue a logical strategy to target soft networks, the Departments of Defense, State and other organizations should have policy options to proactively insulate critical partners abroad. The project to Strategically Protect Soft NetworksTM (SPSN) began as a result of the policy gap in U.S. national security. The University of San Diego has been a vital partner for over two years.

In 2016 I continued research and outreach to further my 2011 thesis work at the College of International Security Affairs (CISA), National Defense University, in Washington D.C. With the support of No One Left Behind, I was able to work with partners in the nonprofit arena, academia, the think tank community, and government to explore potential options for policy development.

In 2018 the project received a grant to accelerate the research and policy development effort. With a west coast and east coast presence, SPSN has been able to engage key stakeholders in government and nontraditional areas to explore policy ideas that would better insulate soft networks abroad.

Project research mines for best practices from government and other sectors to protect local national partners during contingency operations. Research focuses on innovative means of identity protection and relocation, when necessary. For example, researchers from Berkeley have been examining best practices for masking identity online to train government officials, local nationals and contracting agencies.

Given that the preponderance of local national partners get hired by government contractors, the project team looks for ways to raise awareness within that community of stakeholders as well. We have recently presented on the topic in both Los Angeles and Washington, D.C.

Other research delves into the scope of the strategic challenge by cataloguing former interpreters and other partners who have been killed, wounded or forced to flee. Shalinda Sprehn, a USD Kroc School researcher, performed substantive work in this area.

Next Steps and Learnings

Future research revolves around systematically cataloguing the scope of the threat against soft networks, furthering best practices from arenas like nongovernment organizations that operate in conflict zones, the media, and domestic law enforcement designed to insulate vulnerable people like battered spouses or witness protection selectees. Interns, junior fellows and researchers benefit from real world impact. SPSN research has the potential to save lives.

The project to Strategically Protect Soft NetworksTM continues to promote proactive policy to insulate our most important partners in conflict zones. Our research provides team members with the opportunity to have real world impact in foreign policy. Researchers and interns gain exposure to senior policy makers, academics, and outstanding networking opportunities. Other benefits include publishing possibilities, mentorship and potential references. SPSN has research opportunities in Washington, D.C. and Los Angeles, primarily. However, researchers can also work remotely from universities or other professional locations.

If you are interested in joining the team, please contact Ms. Jamie Haag, Director of Research, by email at jlhaag.spsn@gmail.com or contact Kajsa Hendrickson (hendricksonkk@sandiego.edu) at USD’s Kroc School for a project description.

Steve Miska is the Principal Investigator for Strategically Protecting Soft Networks™, a project supported by the Pacific Council on International Policy in L.A. and numerous other partners to protect vulnerable allies who work with Americans in conflict zones. As Director of First Amendment Voice, he leads a nonpartisan effort to reinvigorate civic awareness around free expression, religious liberty, press freedom and other first amendment issues. He retired as a Colonel after 25 years in the Army. His last assignment was teaching three years as the Army Chair at Marine Corps University. Previously, he served in the White House as Director for Iraq on the National Security Council. In 2007, on his second of three combat tours, Steve led a team that established an underground railroad for dozens of interpreters from Baghdad to Amman to the United States. He earned top academic honors as a Counterterrorism Fellow at the College of International Security Affairs and has taught economics at the United States Military Academy, West Point. Steve routinely speaks on soft networks and has addressed DIA, RAND, the Pacific Council on International Policy, the Young Presidents Organization of LA, and numerous media outlets and think tanks. He holds degrees from Cornell University, National Defense University, and West Point. He serves as an advisor to several nonprofits, including No One Left Behind, the International Refugee Assistance Project, and the i5 Freedom Network.