Putting Theory Into Practice: Lessons Learned From My Kroc School Internship in Nepal

Putting Theory Into Practice: Lessons Learned From My Kroc School Internship in Nepal

begin quoteThe following post was written by Master’s in Peace and Justice student Minh-Thu Mai. You can read a previous internship update from Minh here: "From Classroom to Kathmandu: Starting My Kroc School Internship in Nepal"

I can’t believe that I’ve been in Nepal for a month now working at my internship with the Leadership Academy. Since my arrival, I’ve had the chance to work with many of my peers in the office on a variety of different task, ranging from shooting and editing T.V. interviews to lesson planning with facilitators for the third Nepali Emerging Leaders Program (NELP) seminar in August.

So far I’ve helped prep half a dozen NELP participants for their interviews for the Youth T.V. Show that airs on one of the national channels in Nepal. Through prepping them for their interviews, I’m amazed to see the variety of works that these emerging leaders are doing and the way NELP has supported them. Their works range from clean water for Dalit (“Untouchable” caste) villages, supporting women’s entrepreneurship, to LGBTQ+ rights. After these interviews, I sat down with Yeshaswii, who is in charge of putting together the weekly episode for the Youth T.V. Show, and Dinesh to edit and put together a half-an-hour show from five different interviews. The whole process, listening over and over to the interviewees’ responses and then knowing when to add in pictures and videos of their work to match what they’re saying, is definitely a time-consuming one. But creating a good show is worth it! 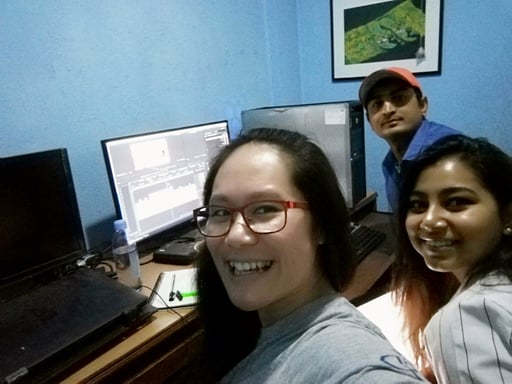 My time in the office has been both rewarding and at times frustrating. I’ve learned that to put theory into practice, I have to also look at the culture and environment I’m living and working in. The practical application of these theories largely depends on cultural surroundings. And this struggle will probably look different everywhere in the world. I’m learning how to put these learned theories into practice in the context of Nepal, keeping in mind its culture and how its society works. People here move and work at their own pace. At first, I was in the mindset of getting things done, working hard and fast, and being efficient. That’s not always how things are done here. Sometimes work that can be managed with a few people is done with almost everyone from the office. For example, when we were shooting the interviews at a local temple, instead of just a few people from the office going, we had almost ten people (including five high school interns) taking two separate vehicles. Everyone pitched in and did little things to set up the shoot once the NELP interviewees got there. At the time, I couldn’t understand why we needed so many people when 3 or 4 people would have sufficed. The shoot went well, and everyone had a lot of fun just being in each other’s company. We all went out for some street food after the shoot and just talked and laughed. It may not have been the most efficient way of doing things, but it was definitely a great way to build relationships among the team. It was a good reminder that the way I do things, the way things are often done in my culture, is but one of many ways of working. And efficiency is not the only important aspect of the work.

Stay tuned for more posts from Minh about her experience in Nepal. In the meantime, you can learn more about the Kroc School’s graduate programs that combine theory and practice to help you advance in your career as a peacebuilder and social innovator.