Peace in Our Cities Kicks into High Gear During Strategy Retreat in Amman, Jordan

Peace in Our Cities Kicks into High Gear During Strategy Retreat in Amman, Jordan

As the world’s urban population continues to increase, cities are finding themselves on the front lines of addressing humanity’s urgent needs, including the imperative of addressing rising levels of violence and fear.

Through the Peace in Our Cities campaign, which Kroc IPJ’s Impact:Peace co-facilitates, Mayors representing 15 cities and roughly 20 million people are championing the roles that they – together with civil society – can play in lowering violence and building peace.

In early February, senior staff from Mayor's offices together with local civil society partners came together in Amman, Jordan to strategically plan how Peace in Our Cities can bring greater attention, resources and evidence-based action to meeting violence reduction priorities. The focus of the strategic retreat was to reinforce the coalition of partners, to set a clear advocacy and messaging agenda, and to articulate a research plan for how Kroc IPJ can support the curation and dissemination of knowledge to aid cities in the work of building peace. 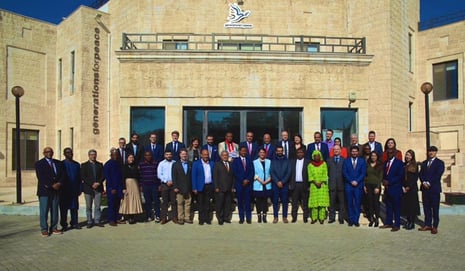 Violence is not only the acute expression of a violent act. It also refers to the presence of fear within society and a lack of what many refer to as positive peace. The range of cities represented in the Peace in Our Cities campaign made clear the imperative of both bringing down acute acts of violence in the short term, while simultaneously building up the factors that reinforce peace within society in the more medium-to-long term.

To do this, Impact:Peace will be building out a research agenda that provides knowledge on what works to address violence across a range of articulated priorities, including violence against women, group or gang violence, political and identity-based violence and more.

On our last day in Jordan, many of the assembled participants enjoyed an excursion to Petra, the “Rose City.” The field trip reinforced social bonds between cities and reminded us that throughout history when people put their minds to something, seemingly impossible goals can be reached. We take that spirit forward as we set our ambitions on a more peaceful, just and safe world for all.