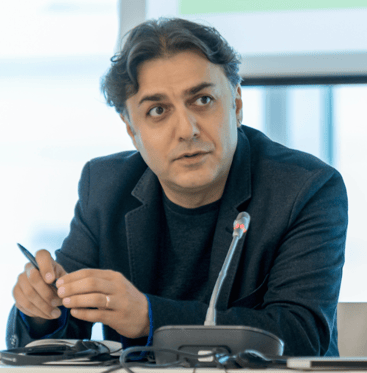 begin quote""I intend to bring to the USD community my commitment to bridging the theory-practice divide and ensuring that the Kroc School becomes the leader in translating the most up-to-date academic thinking into positive social change."

Philip Gamaghelyan, PhD, will be joining the Kroc School's faculty starting in Fall 2018 as an assistant professor with a focus on conflict analysis and resolution. To help the USD community get to know him better, he answered the following questions about his career and life, and the road that led him to the Kroc School.

How would you describe yourself, personally and professionally?

My background of a person who lived through a war, disintegration of an empire and the collapse of a state, and attempts at building of a new one, shapes the global-local perspective I bring to academia. I grew up in Armenia during the final years of the Soviet Union. As a high-schooler, I was active in mobilizing schoolmates to participate in strikes and demonstrations for freedom and for Armenia’s independence. Soon after, the Soviet Union collapsed and Armenia gained independence, but the turbulent years that followed and the war with Azerbaijan cast a long shadow on this monumental achievement.

These formative years of mine were both empowering and humbling. They were empowering as I learned early in life that bottom-up mobilization can bring great and swift change, even when your interlocutor is a super-power; yet they were humbling as the immediate results were not freedom and prosperity, but war and economic collapse. With time I understood that change, while necessary, needs to be strategic, theoretically grounded, and ethical. My search for a milieu where such change can be conceived led me to the field of international relations and later conflict resolution. With time, I developed a resume as a scholar-practitioner, combining the “on the ground” work in conflict zones with research and teaching.

Please give us the highlights of your career that led you to the Kroc School.

I completed my undergraduate work in Political Science and French at the Institute of Foreign Languages in Yerevan, Armenia, followed by a master’s degree in Intercommunal Coexistence at Brandeis University’s Heller School of Social Policy and Management, and a PhD at the School for Conflict Analysis and Resolution at George Mason University.

I started my career as an educator in my undergraduate years, and turned to teaching more consistently in 2012. Prior to joining the Kroc School, I have had the privilege of teaching at Tufts Experimental College, the School for Conflict Analysis and Resolution at George Mason University, Program on Peace and Justice at Georgetown University, Elliott School of International Affairs at George Washington University, and School of international Service at American University of Washington, DC.

My research has been twofold: coming from a region devastated by violent conflicts often seen as “historical”, I long developed a keen interest in investigating the role of memory in inter-group relations. To this end, I studied the representation of self and the others in the post-Soviet education systems, the politics of the production of historical content, and their impact on the reproduction of conflicts. I have authored and co-authored a number of critical articles and book chapters on topics of history, memory and conflicts in the South Caucasus, as well as methodological manuals aimed at formulating alternatives to the existing education models.

My more recent work, however, moved in another direction. Concerned with the apparent inability of our field to effectively prevent or address violence, I refocused on identifying patterns of conflict resolution theory and practice that serve to perpetuate rather than transform conflicts. My monograph based on my dissertation titled “Conflict Resolution Beyond the International Relations Paradigm: Evolving Designs as Alternative Practices in Nagorno-Karabakh and Syria” is a critical and reflective engagement with the field.

What are you most looking forward to about your new role with the Kroc School?

In the 2018-2019 academic year, the Kroc School will be launching the new master's program in Conflict Management and Resolution. Developing that program into the recognized leader of the field that produces advanced scholarship able to address the complex challenges of today’s conflicts while providing high quality training to our incoming students is what excites me most about my new role. As a big believer in the promise of conflict resolution, and yet underwhelmed by our modest up to date accomplishments, I look forward to collaborating with the colleagues at the Kroc School in unleashing the full potential of our field.

What do you hope to accomplish in your first year as a faculty member?

Conflict resolution as a field has been maturing for the past few decades, not least thanks to the continual epistemological contestation of its philosophy and methodology. Dominated by realist approaches during the Cold War, the field moved to rely heavily on neo-liberal theories of economic interdependence and democracy-building in the 1990s. By the late 2000s, as the constructivist paradigm and critical theory started gaining ground in academia, the conceptual conversation in our field also shifted toward the possibilities of building inclusive societies and achieving structural and cultural peace.

Unlike realist and neo-liberal approaches with their clear tools and measurable outcomes, however, the constructivist paradigm constrained by its inherent suspicion toward fixed methods was slow to translate into applied scholarship.

In my first year as a faculty member, I intend to take steps toward incorporating critical theory and constructivism into both scholarship and practice of conflict resolution paving way to more cohesion between the existing paradigmatic shift and our field.

What do you think Kroc School students and the broader USD community will learn from you?

Parallel to my academic career, I have built an extensive experience as a practitioner deploying my theoretical learning to engage in practice in various conflict zones. For more than ten years, I have worked in the context of active ethnic conflicts. In 2007, together with Turkish and Azerbaijani colleagues, I co-founded the Imagine Center for Conflict Transformation that works in post-Soviet states, as well as in Turkey, and Syria among others.

I intend to bring to the USD community my commitment to bridging the theory-practice divide and ensuring that the Kroc School becomes the leader in translating the most up-to-date academic thinking into positive social change.

How do you like to spend your time when you're not working?

I always devoted considerable time and resources to traveling and exploring new localities and cultures. I especially love doing that with my spouse, who is a fantastic travel companion. As an artist and a designer, she has an aesthetic eye for all things colorful that my overburdened by concerns for social justice mind tends to overlook. We are a fun couple: one looking for hidden signs of discrimination and violence wherever we go, the other seeing the beauty at every corner. We complement each other well. Never bored. We look forward to exploring Southern California.