Let Venezuela Be the Test Case

Let Venezuela Be the Test Case

Share This Post
The world should no longer recognize elections in which autocrats win under clearly advantageous conditions and rule. We should not accept that as democracy. 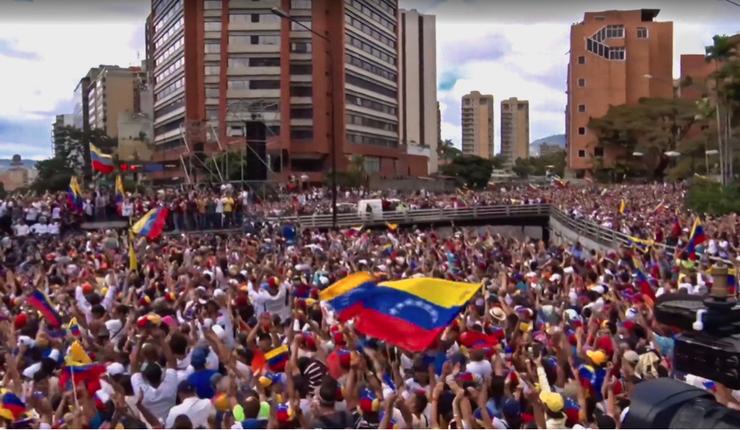 begin quoteThe Venezuelan situation is important because it can be the test case that offers the world new non-violent paths for ousting the entrenched autocrats and dictators masking under the guise of being an 'elected' President.

This is the case of Venezuela. Nicolas Maduro’s victory in May of 2018 was a charade. The government made clear it was watching for dissidents. It was a rigged election filled with irregularities including manipulating the timing of the election, misusing state resources by giving the poor food baskets to persuade these starving people to vote and using public employees to intimidate the outcome. The majority of the opposing political parties were disqualified to participate or in the case of Leopoldo Lopez, unable to run, because he is under house arrest. The unfairness and lack of transparency were so obvious that the election was not recognized by the vast majority of Venezuelans.

Autocrats and dictators, holding on to absolute power for years and even decades have become more politically perceptive than they once were. They are now often recognized as “Presidents” because they held elections and, surprise-surprise, they won their own elections. It seems very 21st Century to control entire nations by winning elections under unfair conditions. And the world often accepts the “winner” because we tend to equate elections as the democratic vehicle for the expression of the majority. The geopolitical politics of refuting unfair elections are much more difficult than refuting power taken at the point of a gun.

Deposing these “elected” dictators will require more than asking them to run new elections that are fair and transparent. It is not in their best interest to do so and they will resist all outside pressures. New strategies are needed to promote the peaceful transfer of power to legitimate leadership.

Venezuela is an opportunity for the international community to demonstrate it has the will and the means to support the transfer of power to true democracy. The current conditions are promising. The Venezuelans on the streets are driving the process of change, while risking their safety and livelihoods. They are the legitimate expression of the people’s will. There is an emerging leader with no ties to past regimes and the clarity to insist on the rule of law and non-violence. Juan Guaidó, President of the National Assembly, invoked Article 233 of the Constitution, stating that in the absence of legitimate presidential elections the president of the National Assembly becomes the interim president of Venezuela. Under Article 233 he must call for new elections within 30 days and Guaidó maintains he will follow through with this provision.

A growing number of countries have now recognized Juan Guaidó as Venezuela’s legitimate interim president. But change will not be simple. For the very first time in many years, I am hopeful for my country of origin. I believe Venezuela, with the support and advice from the world, can shape a non-violent process out of dictatorship that can no longer be disguised as democracy.

I view Venezuela as a test case for change. There is not an easy and well-rehearsed playbook available and there is the imminent risk of escalating violence. However, much progress will be lost if what started as a non-violent protest by millions of Venezuelans is manipulated into a simplistic fight between right and left. Although I feel the anguish of the Venezuelan people and the desire for change, we must be extra cautious when wishing for external military intervention as the solution. Military interventions should be multilateral and should be utilized in the limited role of peace-keeping, not peace-making. The use of military force may, in fact, threaten any eventual democracy by, among other incidental consequences, feeding the narrative of the invading Yankee invoked by numerous dictators.

Maduro’s rejection of Europe’s recent proposal for new transparent and democratic elections led by the National Assembly should leave no doubt where he stands. Maduro’s responses to the Venezuelan majority and a growing number of countries prove there is no more room for negotiating elections. He must go. The world can support in so many ways, including offering asylum for those in the Maduro government, helping to develop processes of reconciliation and transition, contributing to the immediate delivery of humanitarian aid, and constantly publicizing the plight of the people. Amplifying and supporting the voices of Venezuelans matters. It is vital in this process. The Venezuelan public now communicates mostly through WhatsApp, Twitter, Facebook and Instagram. We can join in helping Venezuela leverage its use of social media to minimize the risk of violence and build a path forward.

What happens in Venezuela is important not only because of the current humanitarian crisis or because it has the world’s largest reserves of oil. The Venezuelan situation is important because it can be the test case that offers the world new non-violent paths for ousting the entrenched autocrats and dictators masking under the guise of being an “elected” President. Perhaps peaceful change in Venezuela can help us see a new way forward for these kinds of situations around the world.

The previous post is from Kroc School Dean Patricia Márquez. To read more messages from the Dean, subscribe to the Kroc School Monthly Newsletter here.