How the Kroc School Advanced my Path to Service

How the Kroc School Advanced My Path to Service

begin quoteThe 17 months I spent at the Kroc School fundamentally changed the course of my life.

My peacebuilding education is not what you might call typical: I graduated from the United States Naval Academy in 2004, and I graduated from the Joan B. Kroc School of Peace Studies (Kroc School) in 2013. To some, that combination might seem somewhat dissonant if not outright incompatible. But when I look back on how and why I choose those two institutions, the combination seems obvious to me, perhaps even inevitable.

When I applied to the Naval Academy as a high school senior, I did so for one purpose: to be of service. It was the best way my 18-year-old self could think to do that, no doubt influenced by the fact that both my father and grandfather had also chosen to embark on a life of service at the very same institution. I was drawn to a place that talked not of career trajectory and entry-level salaries, but of duty, commitment and dedication to things bigger than the self. As a young adult, these were vague but compelling notions. 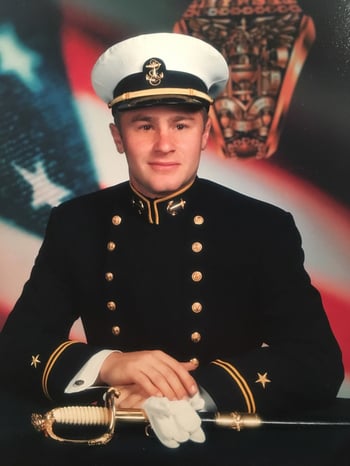 John Patterson at the Naval Academy, where he started his path of service.

I was in my second year at the Naval Academy on September 11th, 2001 and suddenly the notion of what service would mean for my classmates and me was not so vague at all.

After graduation from the Naval Academy, I deployed first to Central America on multiple counter-narcotics missions, then to South Asia on a counter-terror mission, and finally to the Arabian Gulf as part of an aircraft carrier strike group. I earned the qualification of Tactical Action Officer, and I learned to operate complex radar and weapons systems. I monitored radar screens and communicated with pilots, providing updates and giving orders to ensure they completed their missions safely.

When those pilots returned, I watched video from the cameras attached to the front of their planes. I watched as the control room would cheer the accuracy of our bombs, the lethality of our weapons. I watched in grainy, soundless black and white as people died by the dozens. They were bad people, I was told — people whose deaths improved lives and advanced freedoms; people whose deaths were celebrated by oppressed people but not, I suspected, by the orphaned children, widowed spouses and devastated parents whose names I never knew, whose cries I never had to hear.

All of this is not to say that I was not and am not proud of my military service. I am. There are parts of it that I feel conflicted about and parts that I will always struggle with, but anyone who has ever thoughtfully put on a uniform will know that the manufactured patriotism of films and literature is just that – manufactured. The truth of military service is far more complicated.

When I returned home, I wanted something different. I wanted to be of service, but began to wonder if there might not be other ways to serve.

Learning Theory and Practice to Prepare for Real-World Peacebuilding 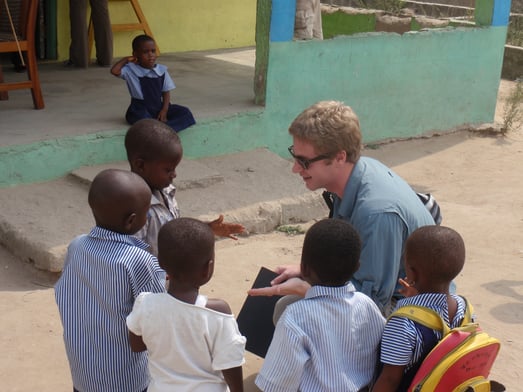 John Patterson on a trip to Ghana while a student at the Kroc School.

When I found the Kroc School, I was drawn to an institution that talked of service, change, and dedication to something larger than the self. At 30 years old, these had become clear and concrete principles on which I wanted to build my career.

It was, admittedly, a rather abrupt career change. But when I look back at why I did it, I did it for the same reason I had went to the Naval Academy: I wanted to be of service.

While a student getting a Master of Arts in Peace and Justice (MAPJ) at the Kroc School, I developed concrete, practical and “marketable” skills to complement the theoretical side of peacebuilding. As firmly as I believed in the Kroc School’s vision to develop communities worldwide where people thrive, and where there is justice, equality and opportunity for all, I knew the world to be a harsh place where peaceful thoughts and intentions were not going to be enough to affect real change. So I focused my studies on economics, I learned how to decipher regression analysis studies, and I did my best to master statistics software programs (no small feat for an English major undergrad!). 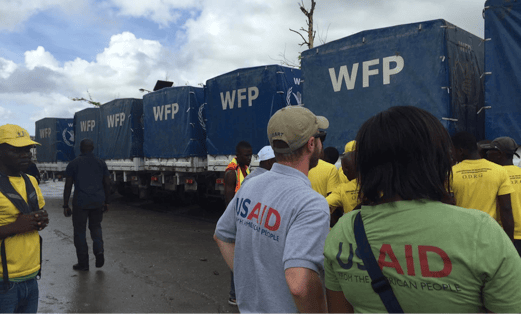 John Patterson partners with the World Food Programme while working with USAID’s Office of U.S. Foreign Disaster Assistance in Haiti.

When I graduated, I took a job with USAID’s Office of U.S. Foreign Disaster Assistance (OFDA), which leads the U.S. government’s response to international disasters. My thought was that after getting my foot in the door, I could move from humanitarian to development work and apply the hard-earned knowledge of statistics and econometrics I had gained at the Kroc School.

I was sent on my first disaster response to the Philippines in 2013 following Typhoon Haiyan. I was assigned to be the OFDA advisor to an aircraft carrier strike group supporting the humanitarian operation in Eastern Samar (apparently I wasn’t going to get away from the military quite so easily!).

When the Admiral in charge (coincidentally my former Commanding Officer from my Arabian Gulf deployment) turned to me and asked, “What should we do?”, I realized that the greatest value of what I learned at the Kroc School was not in understanding regression analysis, knowing how to write code, or acquiring any of the ‘hard’ skills I had thought would get me a job. Instead, the greatest value of my Kroc School education was learning how to make difficult and complex decisions — not from a standpoint of increasing profits, efficiencies or political advantage, but rather with the sole aim of improving lives and alleviating human suffering.

At the Kroc School, I studied the human impacts of policy decisions, how the application of government resources can improve lives when done smartly, and disrupt them when done poorly — even if done with the best of intentions. I learned the importance of understanding context, engaging local actors, utilizing local resources, supporting existing systems. With this knowledge and by working closely with national and municipal authorities and creating linkages to UN and NGO actors, we were able to deliver over 1,300 metric tons of relief supplies to some of the hardest hit and most difficult to reach communities throughout Eastern Samar.

Applying Kroc School Lessons Daily, and on a Global Scale 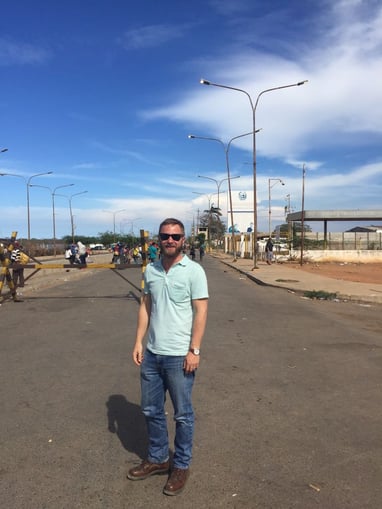 John Patterson at the Colombia-Venezuela border.

I have now been with OFDA for almost six years and have no intention of leaving humanitarian work. I have been part of response teams for multiple hurricanes, earthquakes, conflicts and health emergencies. I was in Liberia for the Ebola response, Haiti for Hurricane Matthew, the eastern Caribbean for Hurricanes Irma and Maria.

Currently, I am the team leader in Colombia for OFDA’s response to the humanitarian crisis in Venezuela. Our team of expat and local disaster response experts is managing over $23 million in humanitarian programs providing health, livelihood, WASH, shelter and nutrition assistance to Venezuelans, Colombian returnees and host communities. Not a day goes by that I don’t apply the lessons I learned at the Kroc School. In meetings with ambassadors, local officials, interagency colleagues, NGO partners and beneficiaries, I am constantly drawing on my Kroc School education to think differently, to be open to new approaches from unexpected actors, to analyze information from different view points and to identify pathways for positive change.

One of the great strengths of the Kroc School experience is its diversity. If you want to study law or economics or politics or conflict resolution – you can do that there. In fact, most of your fellow students will likely be studying different things and preparing to enter different fields. But the true differentiator of the Kroc School is not in what it teaches, but how it teaches; not in what you learn, but in how you learn to think.

If you merely want to be a lawyer or an economist or a politician or a mediator, there are other prestigious schools with more marketable degrees — go there. If you are looking for something different, something more; if you want to make a difference and not just a living — the Kroc School will give you the tools to approach problems from entirely new perspectives, to see solutions others cannot, to pursue and enact peace that others deem hopeless.

The 17 months I spent at the Kroc School fundamentally changed the course of my life. It now colors nearly every decision I make as I try to live up to the calling to be an agent of change, a voice for justice, a maker of peace.

John H. Patterson currently works for USAID’s Office of US Foreign Disaster Assistance (OFDA) as the Deputy Team Leader (Colombia) for the Venezuela Regional Crisis Response. In his five years with OFDA he has worked as an Advisor to US Southern Command, as part of the OFDA Logistics Team, and served on three Disaster Assistance Response Teams (DARTs): deploying to the Philippines for Typhoon Yolanda as a Military Liaison Officer, to Liberia for the West Africa Ebola response as the Lead Civil-Military Affairs Coordinator and to Haiti for Hurricane Matthew as the Deputy DART Team Leader. He also served on the Response Management Teams for South Sudan and Central African Republic Complex Emergencies, the Ecuador Earthquake in April 2016, Peru Flooding in April of 2017 and Hurricanes Maria and Irma in 2017. He has also deployed for responses to Typhoon Ruby (Philippines) and Hurricane Joaquin (Bahamas).

Prior to OFDA, John worked at the Geneva Center for the Democratic Control of Armed Forces (DECAF) a think tank based in Geneva, Switzerland where he focused on Private Security governance. He has also worked for Edify, an Accra based NGO focused on educational reform issues and as a Research Associate at the University of San Diego where he coauthored a study on the illicit gun trade between the United States and Mexico.

He previously served as a Surface Warfare Officer in the United States Navy from 2004 to 2011, serving on USS Rentz (FFG-46), USS Mobile Bay (CG-53) and as part of the PACOM and PACFLT staffs.

John received his MA in Peace and Justice Studies from the Joan B. Kroc School of Peace Studies at the University of San Diego in January of 2013 and his BS from the United States Naval Academy in May of 2004. In 2012 he earned a graduate certificate in International Affairs and Multi-Lateral Governance from the Geneva Graduate Institute of International and Development Studies.

Ready to become an agent of peace and social justice? Learn more about the Kroc School’s MA in Peace and Justice.