From Intern to Facilitator With the San Diego Diplomacy Council

From Intern to Facilitator With the San Diego Diplomacy Council

begin quoteMy early experience with the SDDC pushed me further down the path of wanting to become and advance as a peace and justice leader.

Several years ago, as an undergraduate student in SDSU’s International Relations program, I started my first internship with the San Diego Diplomacy Council, or the SDDC. Their mission is to create professional, cultural, and educational experiences that connect people and organizations, driving positive changes in themselves, their community, and the world.

I will never forget my first day and my first task as an intern. I was asked to make a pot of coffee. I was not a coffee drinker at the time and had no idea what I was doing, but it ended up being pretty easy to figure out and, much to my relief, my new colleagues were caffeinated and satisfied. That was the first of many tasks I completed during my internship with the SDDC. As their trust in me grew, I soon took on much more important responsibilities, including hosting State Department professionals, exploring San Diego with them and connecting them with local government, businesses and organizations related to their field of study or work. My early experience with the SDDC pushed me further down the path of wanting to become – and advance as – a peace and justice leader.

Since then, the SDDC has grown considerably in terms of their team, their office space, their partnerships, and the kinds of programs and services they deliver which “allow San Diego to connect and participate in the international sphere and extend its influence around the globe.” Still a believer in their mission, I recently returned to the SDDC as a volunteer. The pandemic has not prevented the SDDC from continuing its work — in fact, they took time to create a whole new project. The Global Leadership Youth online program is open to high-schoolers who are interested in international relations and diplomacy. The program consists of online diplomacy simulations that allow students to engage in complex global issues and work together to find resolutions. 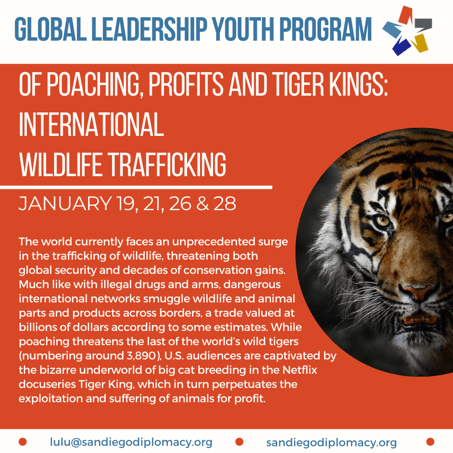 I volunteered with the group to act as a facilitator for the students during these simulations, which have included topics such as women’s healthcare access, ocean conservation, racism, and human trafficking. The setup for these simulations is pretty similar each time. Students split into one of five groups. Two of the groups represent the governments of fictional countries that are in dispute with each other and another group represents the State Department. Then there is a group that is affiliated with the UN as well as a group representing an NGO. Each simulation typically covers a conflict between the two countries related to the given topic.

The sessions typically begin with an introduction and then a game for everyone to get to know each other and move past that awkward Zoom silence many of us are familiar with. Each session also features a real-life local professional in the field who gives a small presentation to get the group familiar with the issue at hand. This has been the most beneficial part for me as I get an insider’s look at the issue and a solid connection with a local organization in this field. Each group is then given a detailed diplomacy module booklet, containing the fictional scenario, and they are split into the teams mentioned above.

My job was to move from group to group and help any if they got stuck and needed clarification. I quickly learned how passionate and intelligent these high-school participants were, and I spent more and more time studying the simulation before the sessions so I was prepared to answer their questions. When I was in high school, I wanted to be a film director and had not yet studied anything in the world of diplomacy. I was inspired hearing these young students speak knowledgeably and thoughtfully on issues I have been studying for over 10 years now. I was even reading the same book as one of the students! 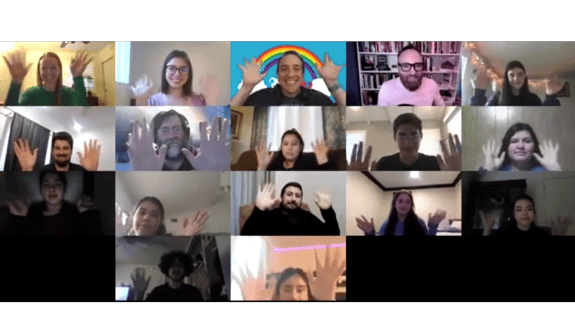 Eventually, I noticed there were two types of participants. Some were eager to map out a game plan and be the one to represent their groups, and others were the silent type. As a sometimes anxious and shy person myself, I understood the reluctance to speak up on Zoom. I decided that whenever I would introduce myself to the groups as the facilitator, I would explain how I have tried to use Zoom to improve my public speaking skills. For example, it has been a bit easier and more comfortable for me to speak while sitting in my own room rather than in front of a classroom filled with students. I encouraged them to have fun and tried to inspire confidence in those that were hesitant to talk. Sometimes students resorted to using the chat, and that proved to be effective as well. As the sessions continued, participation increased and the groups became more productive collaborating as a team.

I then focused more on my role as a facilitator. My first instinct was to tell the groups how I would approach the simulation and my strategy for managing the countries in conflict, but that was not my role. Early in my time as a volunteer facilitator, I was also taking a Mediation course, and I used a strategy from that class to be a more effective facilitator. It reinforced that I was not there to resolve the issue, but rather to guide the students in the direction of resolving it themselves. To help them, I would ask open-ended questions or ask to hear the student's thoughts on how to move forward, then summarize back what they had said so the whole group could be on the same page.

I enjoyed working with these young and intelligent students that I normally do not have the chance to spend time with. At times, I nearly forgot I was working with teenagers and not fellow graduate students. Although I was a facilitator and practicing with this group improved my own facilitation skills, I was also a student myself and took away a lot from the simulations. I look forward to continuing my time as a volunteer with the SDDC and may try to join the team in a more permanent capacity after graduation to help create new simulation scenarios and continue making a positive difference for high schoolers in San Diego, and the community as well.

Kevin Ouellette is a Southern California local from Santa Barbara who has lived in San Diego for eight years. He attended SDSU and studied International Relations. As a Master’s in Peace and Justice student at the Kroc School, he is passionate about finding a career in the Peace Studies field and is enjoying the journey along the way.