Enforced Disappearance and Women’s Peace and Security in Sri Lanka

Enforced Disappearance and Women’s Peace and Security in Sri Lanka 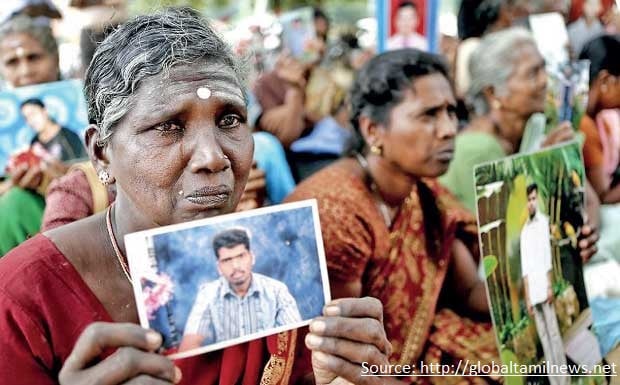 When a country with just 21 million people is rated as having the world’s second highest number of missing persons, “enforced disappearance” becomes a significant term for discussion.

Sri Lanka, which encountered a 26-year prolonged civil-military conflict, is burdened with large-scale abductions and forced disappearances, which began with the Tamil Genocide in 1983. Continuing throughout, and after the armed conflict came to an end in 2009, until 2015, the officially registered number of missing persons was 60,000 to 100,000, depicting the country’s large-scale human rights violations and crimes against humanity. While these statistics explain the gravity of the large-scale disappearance, it is necessary to understand that they inflict a strange cruelty and pain upon the families of the disappeared.

Sri Lanka – not being an exception to this phenomenon – is still facing challenges in creating mechanisms to address the aftermath of the past conflict, deaths, killings, mass displacement, and disappearances. In Sri Lanka, 25.8% of families are female-headed. Among them, most are composed of families with  disappeared husbands.

The impacts of enforced disappearance are being felt by these women in all domains of their lives, from physical and mental health, to job, security, housing, and family life standards. Existing inequalities are visible when compared to those others with male-headed households, with the burdens of the tragedy falling on some much more than others. Single mothers, widows, sisters and daughters are forced into sexual harassment, rape, violence, slavery, and forced migration.

However, not only do these women have no access to justice, they are also being prevented from remembering their past and memorializing their loss of their family members. Living in ambiguity, they scuffle with contradicting memories of remembering and forgetting their violent past. The need to remember remains strong in their minds; yet there is an equally powerful pressure that suppresses these memories temporarily, which comes in the form of fear and the threat of being victimized.

While these women with abducted family members do not acquire the freedom to mourn openly for their loss, they face severe threat and have been traumatized by the tyrannical actions of the government and its security forces.

In the aftermath of the armed conflict when the government constructed a series of monuments to symbolize the three-decade conflict and commemorate their victory over the Tamil rebels in the land where thousands from the minority Tamils lost their lives, it instantaneously and strongly prohibited the minority public from building memory monuments, or placing tombstones for their dead and lost families. The women were forbidden from memorializing the loss by a public ritual or ceremony, nor were they permitted to have the photographs of the missing husbands, sons and brothers openly portrayed as a way to remember.

Even though burial grounds and monuments remind people of the past atrocities, remembering is essential for healing, reconciling and peace, both inner peace and peace with the outer world. The inner peace of these tormented women is a crucial factor for their peace with the society. Peace will not dawn swiftly; peace is a process. Peace becomes a question when one whole community lives isolated with hurt and carries the effects of war. Being left isolated with no space to be heard is worse than the past violence and victimization. Jill Stauffer describes this as “injustice of not being heard”, which is “the compounded silence and inaction of others which leads to loneliness.”

“We have borne the greatest pains of the prolonged conflict; It is not the material reparation that we want; we need to erase this agony; the harsh memories which haunt us every day.”

The women with family missing have stories to remember, to narrate and to be addressed. Memorialization is a useful tool to preserve the memories. The way in which a society remembers events from the violent past emerges as one of the key issues for peacebuilding. Hence, it is important that these women receive freedom to memorialize and narrate their pasts to restore their peace, and to lead towards reconciliation. A constructive approach to the culture of remembering is therefore an important field in peacebuilding and reconciliation. The culture of remembering the past gives a better understanding of the current conflicts in the society and helps to find constructive means for their transformation.

Truth and justice are not separate to reconciliation: they are key parts of it. Hence, for the victims to reconcile, it is important that the truth is spoken out. Dialogues promote social inclusion through arousing harsh memories of violence and violations, and help towards reconciling through understanding of the root causes of the negative occurrences in history.

Therefore, it is crucial for the women who have lost family members to enforced disappearance to have a space to engage in dialogues, speak out their past, share memories – and for their voices to be heard. Memorialization of past memories through dialogues and oral narratives would support the families to overcome trauma, and to reconcile with the violent past for a peaceful future.

Dialogue is a tool to arouse harsh memories and violation of human rights, understand and address the root causes of the conflict, and achieve reconciliation and peace. It is a strategy used to break the cycle of revenge by memorialization, and move from aggression and frustration towards reconciliation. Dialogues of the past, while healing the wounds of victims by exploring and sharing experiences, develop evidence for learning of present and future generations, not to create a sense of sympathy, but to prevent the recurrence of violence and destruction of peace.

For dialogues to take place, these victimized women’s voices have to be heard. Perceptions are connected to a person’s personality, which forms a person’s emotions, attitudes, and behaviors. Historical perceptions are the same, and it is not possible to achieve genuine reconciliation without focusing on the past narratives of these women. Giving them space to remember their violent past, to memorialize their loss would gain them inner peace as well as peace with others.

The voices of these women continue to echo in the country, awaiting justice and peace.

“There cannot be true democracy until women’s voices are heard.” – Hilary Clinton 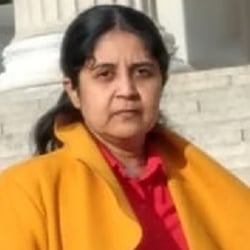 Evelyn Ariyaratnam is a Human Rights Researcher, Advocate and Writer. She has gained extensive experience in monitoring and documentation and protection of human rights during the conflict period and in the post-conflict era with communities and ex-paramilitary groups. She is also an applied expert on human rights education and training; especially on women, peace and security, enforced disappearance, minority rights, and reproductive rights. Her research interests are on undocumented migration and international relations.  She is also a practitioner in the area of historical dialogues, reconciliation, transitional justice and peacebuilding.