begin quoteAt a time of heightened mistrust and suspicion between law enforcement agencies and the public, a peacebuilding approach is needed to bring the two sides together to restore damaged relationships and rebuild trust

How can U.S. communities and law enforcement agencies use data to improve policing and make communities safer? More and more individuals, organizations, and departments across the country are beginning to ask these questions and to gather the information necessary to answer them.

As part of this effort, in 2015 the California Legislature passed the Racial and Identity Profiling Act (RIPA) that, among other things, requires law enforcement agencies to collect demographic information about the individuals they stop including their age, race, and sexual orientation. Under the law, the state’s largest agencies (those with 1,000+ sworn personnel) began collecting data July 1, 2018. These first agencies included the San Diego Police Department (SDPD) and the San Diego County Sheriff’s Department who recently released the first year of RIPA data collected from July 1, 2018 to June 30, 2019.

Upon its publication, the American Civil Liberties Union (ACLU) of San Diego & Imperial Counties commissioned Samuel Sinyangwe, co-founder of Campaign Zero, to analyze the data. The resulting report, as well as another analysis conducted by Voice of San Diego and the UC San Diego Extension Center for Research, identified numerous disparities in treatment at the hands of law enforcement. Police officers and sheriff deputies stopped black people at rates disproportionate with their percentage of the population. And when stopped, they are more often searched and to have force used upon them. The analyses also found that police searched and used force against people identified as LGBTQ+ or disabled more often.

Unfortunately, these reports have worsened already strained relations, deepening divisions between law enforcement and the community. Both SDPD and the Sheriff’s Department immediately disputed the findings of the reports. One SPDP official accused the ACLU report of being “designed to push a political agenda” while a representative from the Deputy Sheriff’s Association of San Diego said the data is “not the smoking gun” of racial profiling. Prior to the publication of the reports, SDPD had contracted with the Center for Policing Equity to conduct a separate analysis of the data. Meanwhile, Monica Montgomery, City Councilwoman and chair of the Public Safety & Liveable Neighborhoods Committee, called the findings “extremely concerning”.

Safer, more peaceful and just communities rely on healthy, productive relationships between police and communities. At a time of heightened mistrust and suspicion between law enforcement agencies and the public, a peacebuilding approach is needed to bring the two sides together to restore damaged relationships and rebuild trust through confidence-building measures, shared problem solving, and dialogue. This approach is needed when it comes to data as well. Both sides need to be involved in setting the research agenda: What questions need to be asked? What information is needed to answer these questions and how will it be collected? What does the analysis genuinely reveal? Part of this process also involves holding one another accountable for the results that emerge from this shared data analysis.

Fortunately, there are successful examples of how this can be done. This January, the Kroc Institute for Peace and Justice is partnering with MEASURE to host the Big Data and Community Policing (BDCP) Conference 2020. MEASURE is a Texas-based nonprofit whose mission is to use data and education to empower communities to eliminate social disparities. MEASURE’s unique approach, embodied in the BDCP2020 Conference, brings community advocates and activists together with law enforcement and researchers to engage constructively with one another about data and its meaning. Only by using data together can the community and law enforcement produce safer, stronger communities. 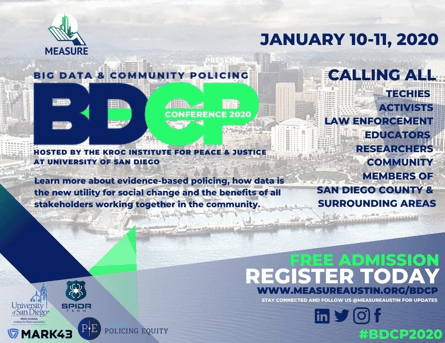 Since 2017, the Kroc IPJ has been improving the public safety of San Diego through stronger police-community relations through its Building Trust Partnership.